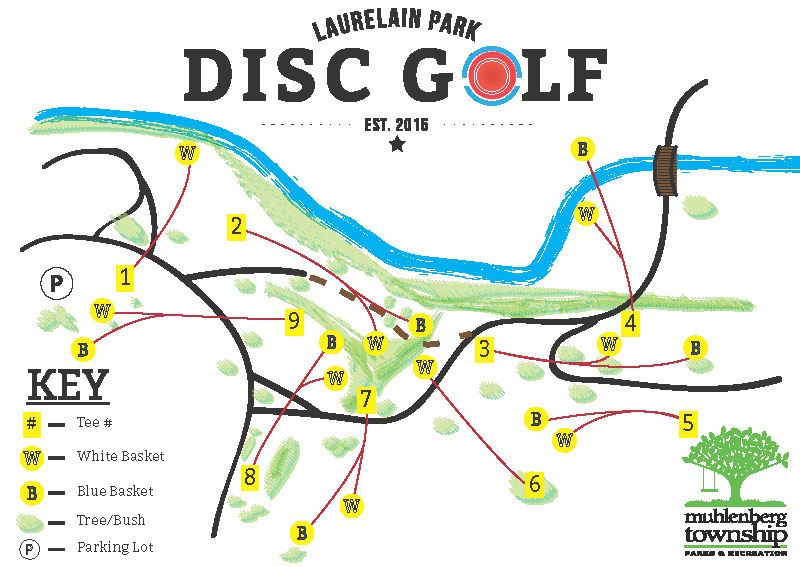 View detailed information and pictures of the disc golf course. Download the course map as well as the rules and regulations.

The Laurelain Disc Golf Course was recently featured in the Reading Eagle! See the following article.

Shirlene Klusewitz, a regular walker at Laurelain Park in Muhlenberg Township, wasn't sure what the teenage boys were up to this spring.

They brought wood and cement and 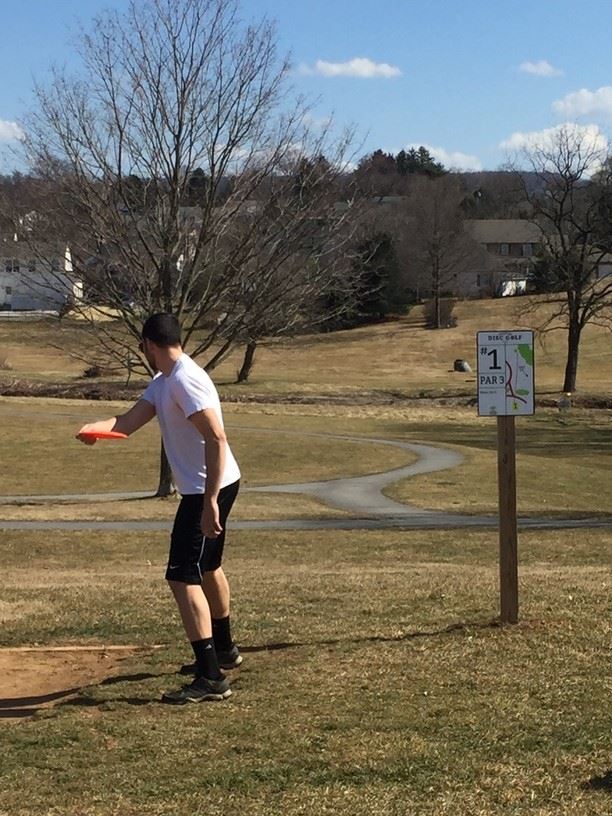 cleared some brush. They installed what looked a little like chain-link bird feeders.

Klusewitz was back at the park recently for an informal disc golf clinic.

This is a very good course to learn on, the 50-year-old Muhlenberg woman said after an errant toss toward one basket. It's very open.

After being appointed to a vacant commissioners seat in 2014, Steven P. Wolfinger suggested disc golf. His son Paul had been playing for a decade, and there was only one course around Reading city limits.

Enter Skylar Radka, then a 15-year-old sophomore at Muhlenberg High School and a Boy Scout in Troop 161. He decided to create the course for his Eagle Scout service project.

I fought him on it, his mother, Beth, said. His older brother built a (bar) in a courtroom for his project. I thought this was too big of an undertaking. But he wanted this.

Skylar, now 16, worked closely with township employees to design the course, which was not easy. More meandering course routes along Laurel Run were scrapped to avoid potential issues with soccer fields and bordering properties. The "driver" discs, lighter and sleeker than your typical Frisbee, fly far and can really bend.

We must have redesigned about a dozen times, he said. I learned a lot about communication.

Wolfinger bought the nine baskets, and Lowe's donated some supplies. Skylar designed the hole renderings next to each tee pad, or the start of each hole. Other Scouts and his older brother, Dylan, helped with some of the manual labor.

Kevin S Lerch, another township commissioner and an assistant scoutmaster of Troop 161, said it's one of the more ambitious projects he's seen a Scout take on.

The nine-hole course opened in July after a year's work.

About 15 people showed up for the recent clinic. Paul Wolfinger, who plays competitively, explained the different types of discs and demonstrated a few different throws. Lerch dropped his own Frisbee in disbelief.

Can we get GPS on these things? he asked.

It is amazing how they try to hide on you, Steven Wolfinger said. I spent an hour looking for one once. I recommend putting your name and number on yours.

Muhlenberg is renting three-disc sets for $35. If you return all three discs at the end of your round, you get $30 back.

Otherwise, playing the course is free.

Disc golf is really cheap, said avid player Kevin Hopp of Lower Heidelberg. It's like the opposite of ball golf.

Radka said Muhlenberg students have started frequenting the course. He's proud of creating something that he estimates will be around for at least a couple decades.

Klusewitz expected that she and her husband will buy their own discs and take advantage of the course.

I'm excited - it's something to do that's not too hard on the body, she said. This is a good thing for the community.